Everyone wants the Scooby Doo moment.

For those that missed out on Scooby Doo as a child, every episode ended with Scooby and the gang explaining what the villain did wrong and why.

The villain would then confess to the crime (followed by "...and I would have gotten away with it if it weren't for you meddling kids!").

Wouldn't it be incredible if witnesses did the same thing during cross-examination?

For example, you're cross examining a defendant in a car-wreck case and by the end of your cross, the defendant goes "you're right... I'm at fault!"

That's the dream scenario right there! 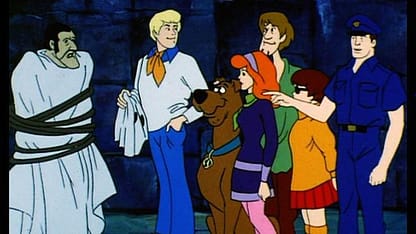 For the most part, this final scene of Scooby Doo is pretty similar to a cross-examination. In particular, cross-examination involves you going through the facts with an opposing witness (i.e., "the villain") in an effort to prove a point.

But, there's one major distinction!

Unlike in Scooby Doo, cross-examination must stop at the facts. NEVER try to get the opposing witness to confess an ultimate issue.

While every lawyer would love for the witness to say "you got me," that is unlikely to happen in real life.

Asking one question too many.

Even if you follow the One-Fact, One-Question Technique, the witness will never agree with your ultimate conclusion. Instead, they'll either deny, deflect, or just ramble in an effort to avoid agreeing with you.

Not only does this cause your cross to end on a flat note, but it also gives the witness an opportunity to try to justify their actions.

Question #1: You were driving that night, correct?

Q2: And your vehicle rear ended my client's vehicle, correct?

Q3: So you're at fault for the collision?

A3: I don't think so. I tried to slow down in time but the road was slick.

With the above example, the lawyer asked one question too many. While A3 wasn't damaging to the lawyer's case, ending the cross-examination on A3 isn't going to leave any lasting impressions on the jury.

Therefore, the lawyer should have stopped after receiving A2. If the defendant is admitting to rear ending your client, do you really need the defendant to admit to being at fault? Probably not.

In fact, by the time you're asking these questions at trial, the defendant has denied liability for months or potentially years. Why would the defendant fold now?

It is highly unlikely that the defendant will change course just because he or she is on the witness stand (P.S. here's a good way to pin down a witness like this and a video to watch).

By stopping right before the ultimate conclusion (like with A2), you are giving the jury a puzzle piece. And if you're clear and concise throughout trial, then the jury will most likely be able to put the puzzle pieces together on their own (that the defendant is at fault).

Either way, it's your job to put all the puzzle pieces together during your Closing Argument. Especially after you have asked the most important question for a killer cross examination.

Always remember to not get greedy by asking one question too many. If you try to get the witness to confess to an ultimate issue, then you're jeopardizing your entire cross examination.

Instead, stay disciplined by limiting the scope of your cross-examination to just the facts. This will build the foundation to your upcoming Closing Argument.

In short, leave the confession moments to Scooby and the gang.

How to Prepare Clients for a Deposition: 12 Helpful Tips