The above YouTube video about Opening Statements is probably my most in-depth video about trial advocacy to date.

In it, I walk you through the 10 steps to having the best Opening Statement ever.

Each step is strategically placed within your presentation so you can maximize your Opening Statement.

I made this video after releasing my mini E-Book the 10-Step Formula to the Perfect Opening Statement.

If you haven't received your FREE download yet, then what are you waiting for???

In fact, so much thought went into this Ultimate Guide to Opening Statements, that the above video is a lesson in Trial Ad Academy.

So whether you're figuring out how to deliver a mock trial opening statement or you're preparing for an actual trial, check out the video and then keep reading!

The best part about Opening Statement.

Compared to the other parts of trial, Opening Statement can be the most planned.

At this point in trial, you have typically just ended jury selection (or "voir dire" for the fancy folks) and you have the entire trial ahead of you.

As a result, there are two things that may impact your Opening Statement.

I.  Motion in Limine

The first one is the other side's Motion in Limine.

If you don't know what a Motion in Limine is or if you want to better understand its importance, then definitely watch this video here.

Using a Motion in Limine the correct way can be an absolute game changer and can have a major impact on an Opening Statement.

For example, if the judge decides to grant the other side's Motion in Limine on a fact or piece of evidence, then you're not goin to be able to bring that fact up during your Opening Statement.

Just because Jury Selection has ended, that doesn't mean you forget about everything that happened as you were getting answers from potential jurors.

Instead, you want to arm yourself with portions of jury selection that you can use during your Opening Statement.

But we'll talk about this in more detail later on in this post. 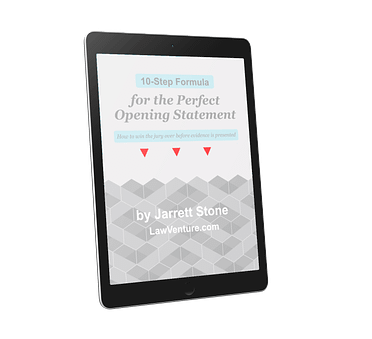 How to write an Opening Statement.

Using the 10-Step Formula described in the above video, you can apply the facts and theme of your case to each step.

And in order to write a winning Opening Statement, you'll want to avoid being over-the-top with the drama.

Opening statement is all about previewing the case for the jury. It is not about arguing the case (if you start arguing, then you may raise an objection from opposing counsel).

So your goal is to come off as a teacher while you subtly and gently argue your case in a persuasive way.

In fact, you may want to lean towards underpromising so that you can eventually overdeliver during Closing Argument.

The last thing you want to do is promise something during Opening Statement, not deliver on that promise during trial, and then have the opposing counsel call you out during Closing Argument.

Finally and most importantly, your Opening Statement script should have blank spaces!

A key to the best Opening Statement ever.

Instead, you should cater all of your Opening Statements to the particular jury that you are in front of.

To do this, you should implement aspects of what has occurred prior to delivering your opening statement.

For example, the judge will most likely talk to the jury a couple of times before you start previewing the case (usually about procedural things).

In that situation, you either want to incorporate some of the judge's statements into your Opening Statement to piggyback on his authority or you want to omit any portions that might be redundant to what the judge has already said.

If the idea of not sticking 100% to your Opening Statement script freaks you out a little, then read on!

Now that you have your Opening Statement outline written out, then you need to practice presenting it.

I know, I know... It's not sexy or cool to practice a presentation in the mirror or in front of people.

And I know that "practice makes perfect" is overused these days.

But, I can guarantee you that practice will be the best way to iron out any wrinkles of your Opening Statement.

And just because you have an amazing Opening Statement written down, that doesn't mean it is going to sound or look amazing.

So I recommend that you practice both your movement, voice inflections, and pauses when delivering your Opening Statement.

Trust me, you don't want the actual jury or mock trial judges to be your guinea pig.

Plus, by practicing, you can simulate different variables for the blank spaces that you've incorporated. This will make you 100x more comfortable on game day.

And here's a hidden bonus...

By reciting and rehearsing your Opening Statement, you'll simultaneously be preparing yourself to make a great Closing Argument because the outlines will be similar.

A bonus tip is watching Opening Statement examples so you can see what positives to put in your Opening or what negatives to avoid.

For example, in this Opening Statement example, there are some mistakes that a prosecutor made during a murder trial that the prosecutor is unaware of. But, from the perspective of a juror, the mistakes are a bit more obvious.

Therefore, as you watch Opening Statement examples, be sure to watch them from the perspective of a juror. Does the presentation make sense to you? Is it persuasive? Does the lawyer seem credible?

Moreover, if you're new to making Opening Statements, then watching examples of Opening Statements can help you see different styles in action. The goal is then to analyze these presentation styles to figure out which version fits your voice best.

You want your Opening Statement to leave a great impression that lasts for the duration of the trial. You can only make a first impression once, right?

By following the Ultimate Guide to Opening Statements, you'll be able to touch on the most important parts of your case while presenting everything in a way that makes sense.

And that's the key!

Jurors gravitate to the story that makes the most sense to them. By utilizing the tips in this post, you may find that the jurors are already leaning your direction before evidence has even been presented!